* Note - The system will regulate it's rate of rotation  and shut down if the logic circuits indicate component failure or systems fault ( ie stuck safety valve to much flow pressure , and
or incorrect electrical grounding or to much static electricity produced within the system..

* Note - Because this system produces High Suction ..at Air flow intake The casing must cause diffused intake and controlled pneumatic venting to the exterior of the systems final
casing..( for outdoor use preferred  -  if used within dwellings then addition fan systems to vent the Ozone will be required with exterior air intake with separate diffused
filtered  air intake system.  ) and the case must then also be water safe and made safe  for people to be close to the shielded intake ports..that is also safe for wild life
with a distance separation cage between the filtered intake and diameter of the safety cage.

* Note - As an added safety measure the flow tubes will be wrapped with  fiber glass insulation  ( 1 1/2 " ) then   wrapped in spiral fashion with Fiber glass cloth plus
epoxy resin to the thickness to prevent  ( projectile from flow pipe rupture ) Aprox 1/2" of fiber glass cloth plus epoxy resin ( outer pipe shell  ie.  wrap full pneumatic system...  ).
Do allow for pneumatic pressure venting  when wrapping the outer system "shell".... Additionally a band of carbon graphite  ( thermally cured in enclave )
around the outer most shell container to prevent projectile of impeller vane should component failure occur. the carbon graphite ring.. will be then placed around the
circumference of the compound wheel and secured in place by adhesive. Also note when securing the base of impeller vanes use correct type of epoxy and rivet twice..first
round to secure washer spacers also glued then let the epoxy semi cure then full stress the first set rivets...breaking the rivet  ..then knock out the stressed rivet pin and pin head
out and insert another pin with epoxy coating to then be set into the compression ( set rivet casing ) securely but do not stretch the pin... then let the epoxy cure fully and cut
the remainder of the rivet  off then cap seal with epoxy. This will reduce the chance of the impeller vane becoming detached from the wheel....

* Note - Also flow tubes will be glass lined and or insulated with inflatable rubber bicycle inner tubes then glued to the inner liner of the flow tubes to insulate the flow tubes from
static electricity  and flow system will still require electrical grounding even with lined tubes.... :) An  electrically conductive metal grid within the air flow then also connected to
the electrical ground will be required...make sure to use heavy wire for the grounding....  the "grid" should gradually collect and ground the static electricity ..how ever be aware
the air can produce capacitance....  ( holds electricity at high intensity ) so use heavy wire to hold the charge level that will be encountered....  start with 240v level wire like for
a house hold range / oven..

This system is intended to produce clean fuel less electricity with the initial start pressure then also being able to be stored with in the system for subsequent " re - starts" . Pneumatic pressure is released in number 30 unto the draft compressor assembly to cause rotation of number 20 to begin rotation causing compounding velocity rate also drafting air and causing number 15 and number 14 to begin to rotate.   Electrical current produced in number 5 is fed to a power converter and changed into Ac current the metered by the logic circuits in number 7 the to be fed to number 14.   Simultaneously the Dc current produced in number 5 is regulated and then fed to number 10's Stator / field coil and then allows the alternator to then produce electricity then fed to number 9 ( another Dc to Ac power converter, yielding electrical current then controlled in number 7 and then routed to number 2 and the number 3 ( number 3's magneto alternate circuit redundancy to compensate for circuit failure ).  This will yield  Ac electricity out put in number 3 then at High Voltage ranges.  The system is "load re- active " ie. when a high electrical demand is placed upon the generator ( number 3 ) the electrical current to number 2 will then be increased By 60% of electrical production from number 3. To then compensate for the additional loading and yielding a climbing /  increasing  operational current level.

The "drafting" compounder then accelerates upon the suction produced drafting across the then propeller / impeller in number 20 [ right side depiction of number 20  ]  closes to the intake flow..this said compressor impeller is then also attached to the base of the pulley gear system causing greater rotational rate amplification and continuing to increase the rotational rate by directing the pneumatic flow then under compression by "funnel" and increased velocity, to then impale the impeller upon the circumference of the wheel number 20.

The pneumatic pressurization cycle will reach an operational limit governed by the logic circuits, pneumatic valve position ( orifice diameter )  and max pressure safety valves venting , then  causing  a base rotation upon the main generating assembly. The added increase of inertia will then be derived by electricity converted into magnetic "pressure" to then advance the rotational rate to compensate for the "baug" effect when the main generator number 3 is then  encountering " loading ".  The pneumatic velocity flow across number 1 will then also counteract the resistance produced when generating causing the field resistance to then null and or then "tilt" forward..to then cause greater effect of the electric motor number 2

To clarify the design depicted below ....there are two independent drive shafts within the flow assembly..... ie. numbers 14 and 15 are a separate drive shaft rotating independently from the compound "draft" cycle containing numbers 20 and the associated drive belt and gearing by pulley system.

In the design depicted below high turbulence is produced within the "draft" compounder so to correct the turbulence within the system a flow by-pass manifold may become required for systems efficiency. So between number 22 and number 23 a circular toriod hemisphere with exhaust flow tubes ( sum of 8 about 360 degrees )  will be placed between the draft accelerating impeller and number 22 the flow will then exit the main draft chamber then to re - enter the chamber ( via pneumatic pressure tube )  and vent prior to number 20 ..between number 20 and number 23...so that also an increased diameter at the exit port orifice allowing for high.... un -  impeded suction flow to occur.  98% of pneumatic flow will then by pass the drive
belt system , allowing for the remainder of 2 % of total flow to then slowly evacuate the drive belt chamber ..ie "small" ports allowing pulley gearing chamber to have pneumatic flow through itself.... 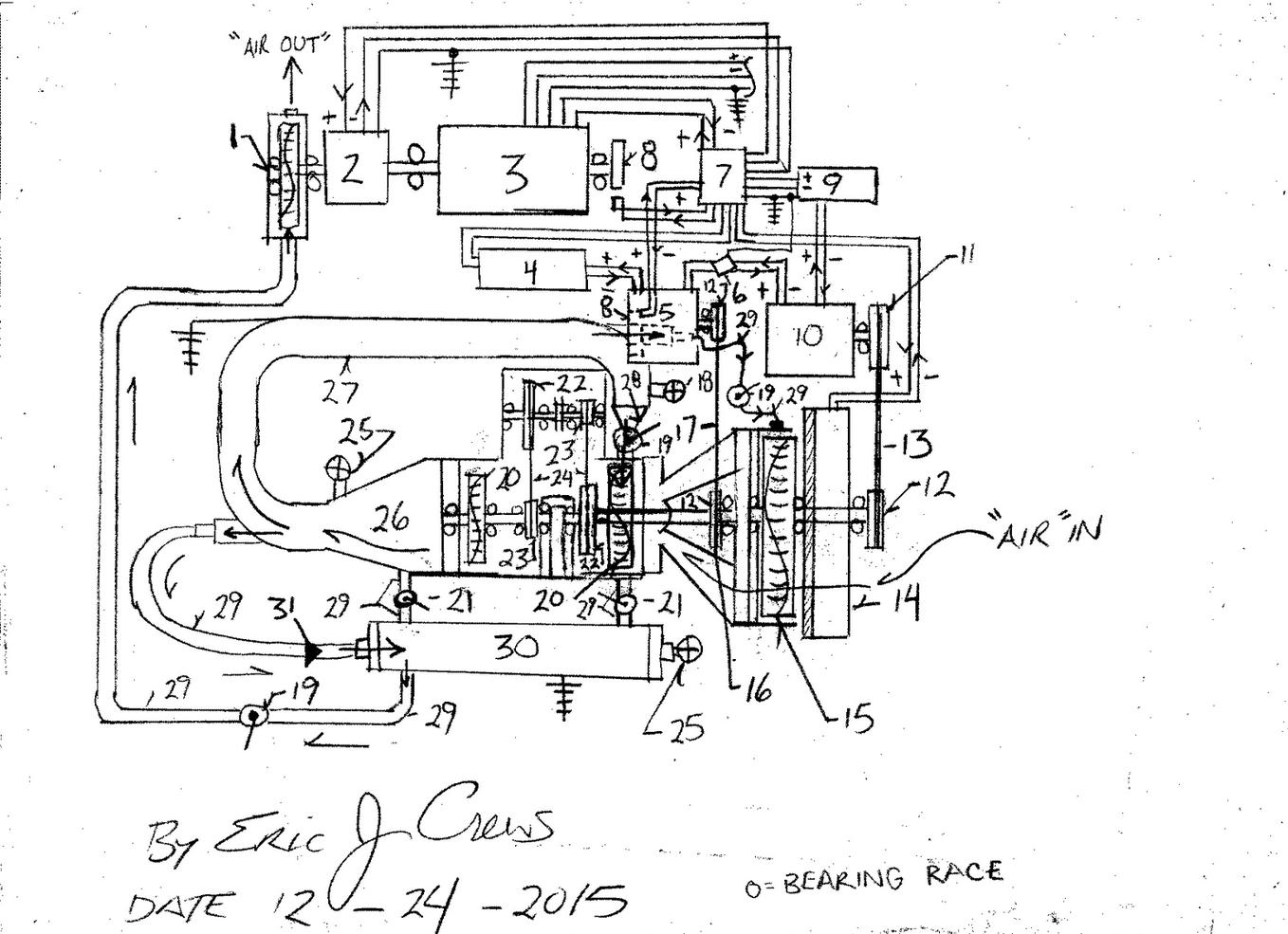