This system is relatively low cost "source" of Clean electricity , operates independent of exterior environmental conditions and can attain high density high voltage electricity
production 24 /7. The design system is mobile and scalable.  Will work if implemented for an electric motor cycle.. the Alternator can increase in Voltage and amps to then power a separate electric motor to rotate the transmission /wheel...it may possible to avoid the use of the transmission upon the motor cycle then and go direct active ( electric motor to belt or chain to rear wheel )  This will lessen the production cost of the designs implementation.( the place where gasoline motorcycle gas tanks are then becomes a tool box on the electric motorcycle design ) and or other applications where the need for remote or emergency electricity is required ( back up generator in case of weather )...

If used for the Motor Cycle design the valves number 12 ( sum of 3 ) then become controlled by central control mechanism to regulate and be able to cause all stop if component fails by internal fault sensor in the electric valve ( electric valve also has upon it a manual lever for "by hand " adjustment..

If scaled number 4 can increase in current level output...... also can be an Ac high voltage generator with magneto and R.P.M. sensor to then report to the logic circuit board and display upon the instrument cluster display. Number 4 will also have shielding upon the side of the transfer chains that will also have upon it cooling fins for the generator so that pneumatic flow is guided around the generator number 4. the ventilation for the alternator number 4 is then by  tubes to exterior system casing one tube air intake with sponge with in cavitation between maximum exterior casing and " engine system casing" upon the intake air into the alternator. The air is then vacuum pulled into the alternator by an internal vacuum producing pump within number 4,  then the air is exiting through the second tube into open air to the exterior of the maximum exterior casing. Optional refrigeration system for forced cooling may be added to the air inlet line to number 4  if the implementations adaptation required very high current production. Maximum exterior casing also has within an orifice a one way pneumatic air inlet valve that will allow air into the cavitation  between the system "engine" casing and maximum exterior casing...this allows for air intake for the alternator free of most water/ humidity...air may also pass through cooling evaporator if required.

As an addition / modification a directional reverser  ( clock wise rotation counter clock wise rotation ) may be required upon the impeller compressor drive line also then causing the direction of pneumatic velocity to stay within one direction. this balances a tilting that may occur at high speed operation. "Reverser Unit" upon lower drive shaft between number 9 and 10.

The pneumatic compounding systems ( ie. compressors and impellers ) are then connected by drive shaft assemblies and rotational torque transfer drive chain.
Number 19 driven by number 5 is then as option a rotational transfer drive belt and the sprockets...then become pulley ( sum of 2 ) large and small respectively.

Once the system is running number 5 may also be wired to then generate electricity then acting as a "drag" generator causing the system to slow by the then resistance of magnetic
field ( field coil / stator ) will require additional wiring and current control system then in number 7 ( secondary battery charging current feed source). Percentile of generated current in number 4 can then feed number 5. Number 5 can also work as a breaking system if wired to then generate as well....when shutting the system off.

Number 26 is made from a small bike wheel with the spokes wrapped to then form an impeller ( looks like a propeller ) but is impaled by the air flow. the circumference then has additional impeller fins about / around the core impeller and is driven by pressure under velocity to counter act the effect of gearing ie. rotational amplification causes resistance.

Numbers 9 and number 10 are interchangeable....

Also system can be all Dc current systems motor ...generator and or all Ac current...

The depicted system uses a non flammable lubricants to lubricate the drive chains...also must be factored mild evaporation..of the lubricant as it will effect the system ...the evaporation of non flammable lubricants  may some what change the properties..then if that's the case an inert substitution of the fill gas ( air  ...possibly changed into  inert noble gas / Argon ) may be made to adjust the correction for thermal safety.

Also the drive belt from number 5 then also has a pneumatically sealed cover to retain the air / inert gas  pressure.

As an additional feature that may be added to some models a turbo hyper air pressure injector to the cause the impeller number 26 to then be impaled by high velocity pneumatic pressure then injected through  number 11 impaling number 26... the added "turbo" compressor is fed current from the excess produced while generating and pumps pneumatic pressure from number  18. the "turbo" will then be  part labeled "Z" upon drafting http://designdeskinc.com/Tri_-_Plex_Lifter.html.  Addition circuits will be required when the turbo's "boost" is activated to the be able to carry and handle the increased current loading then fed to the main electric drive motor  post generator system. The turbo's base feed current is at set rate though variable  as the baug rate "loading" rate of the main electric motor requires....... the boost then uses separate circuit pathways to deliver higher current levels to the main electric drive motor post generator number 4.

Note on impeller fins about the circumference of the compressor and circular impeller.... when obtaining high velocity centrifugal force tends to cause objects to move outward from the center of rotation...to prevent component failure and or part fracture.... the housing for the compounder ( compressor / impeller ) must be able to with stand the maximum centripetal force of the fractured fin upon the  compressor and or impeller. The housing / casing then can be constructed of layered multi stack carbon graphite composite ( vertical laminate referencing position of the design as depicted  ) + plus 2 diagonal wraps ( counter winding ) of carbon graphite..for the first "shell" ...then surrounded by ballistics gel within a cavity. ( cavity between the two casings ) ..then the outer casing a second hull of carbon graphite in the same fashion as the primary pressure retainer but 1/2 the thickness. The first shell the is thick enough to prevent projectile from escaping the first ( 1st )  shell pneumatic compressor impeller housing, then final coating atop the second shell will then be to resist ultra violet light, salt, oil, and other petro chemicals ...prevents degradation of engine system. The pressure tank number 18, is constructed in the same fashion with the gel then able to self seal a rupture.....

To hyper pressurizing by reduced start time interval a ratio gear set placed upon the lower drive shaft at a ratio of 1:20 rotations....the with the lower 1 connected to the input rotating torque then emanating from the drafting impeller number 26... so that the pneumatic compressor is rotating then faster... The ratio of sprocket / pulley is then number 9 to 4 , number 10 to 1 as a 1:4 ratio. An advanced ratio gear set upon the drive shaft connecting the impeller ,26 to compressor 20  could the bi directional by switching then connected at center union by electromagnetic clutch. So that the additional gear box could produce 1:20 ratio or 20: 1...  Also upon the high side of the ratio gear set ie. the 20 of the ratio will also be upon the drive shaft a pneumatic impeller then fed air pressure from the air pressure storage tank number 18. the additional pneumatic flow tube will have an electric valve regulated by the system logic board and vent through the ratio gear boxes impeller on the high side of the ratio then the pneumatic pressure  / velocity will vent so that the discharge will then be angled  to cause perpendicular impalement upon the circular center impeller number 26 the said  vents then 360 degrees and cause 8 injection flow ports. This flow tube /line addition counteracts  the resistance "weight" out of the effect rotational rate amplification  of the ratio gear set.

Because of the nature of this system redundant regulation of velocity is required...it will then also require additional max pressure safety valves upon number 3  and pneumatic return lines also containing pneumatic  one way valves  for the pneumatic pressure flow  into pneumatic pressure tank .( also top vent safety valve dumps the air pressure  outside of the system. to prevent explosion ) ... within the valves will also be sensor' s that  regulate max velocity rate as the sensors will then cause the system to then slow by restricting feed air by electric valve number 15 and or then causing the electromagnetic clutch to then slip by lowering the electricity to the electro-magentic clutch.  Also number 5's electrical out put when adjusted as a drag balancer   ( generating mode ) can then increase the Stator / field coil in number 4 to slow the system

* Note - As an added safety measure the flow tubes will be wrapped with  fiber glass insulation  ( 1 1/2 " ) then   wrapped in spiral fashion with Fiber glass cloth plus
epoxy resin to the thickness to prevent  ( projectile from flow pipe rupture ) Aprox 1/2" of fiber glass cloth plus epoxy resin
( outer pipe shell  ie.  wrap full pneumatic system...  ).
Do allow for pneumatic pressure venting  when wrapping the outer system "shell".... Additionally a band of carbon graphite  ( thermally cured in enclave )
around the outer most shell container to prevent projectile of impeller vane should component failure occur. the carbon graphite ring.. will be then placed around the
circumference of the compound wheel and secured in place by adhesive. 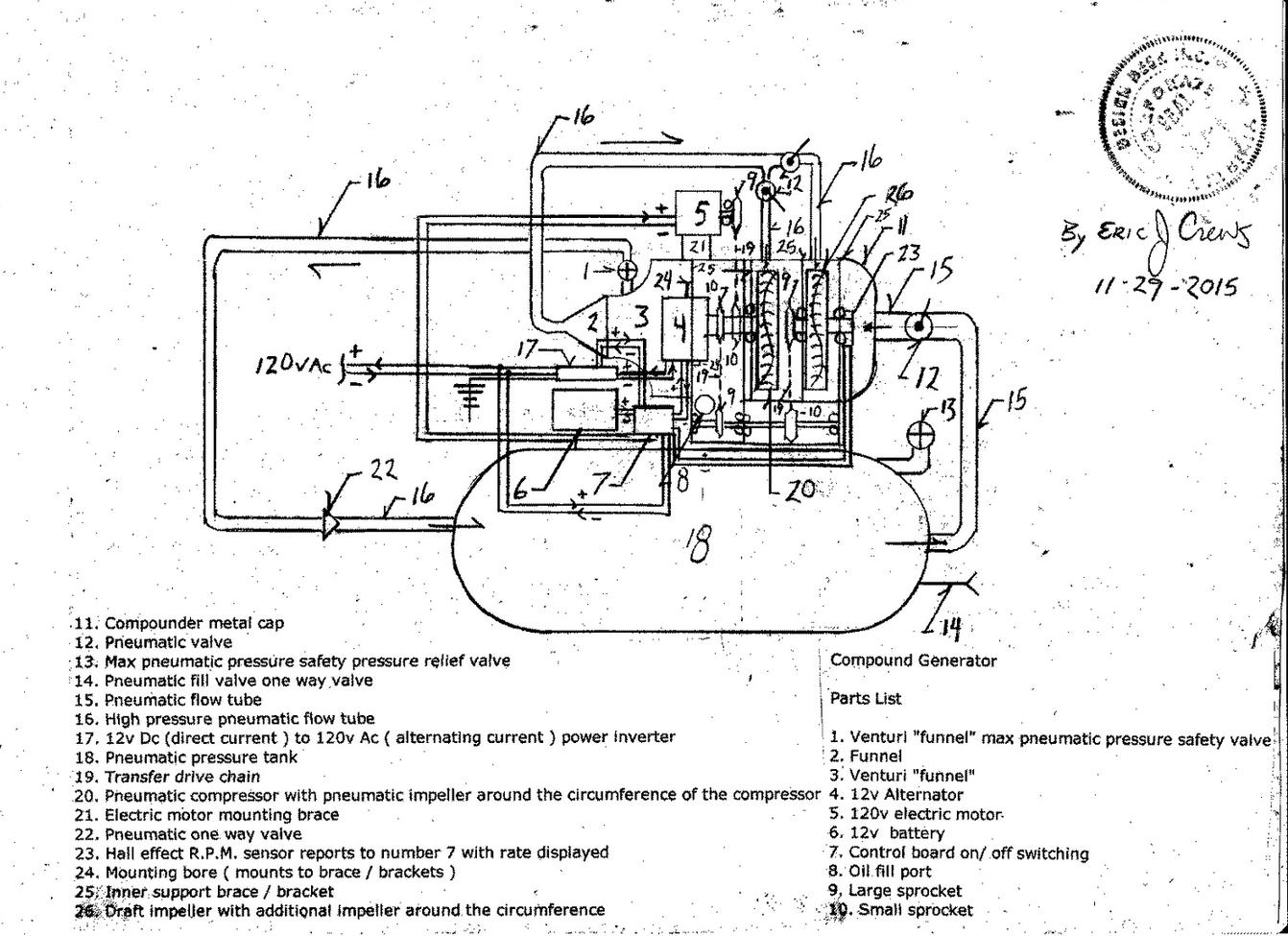