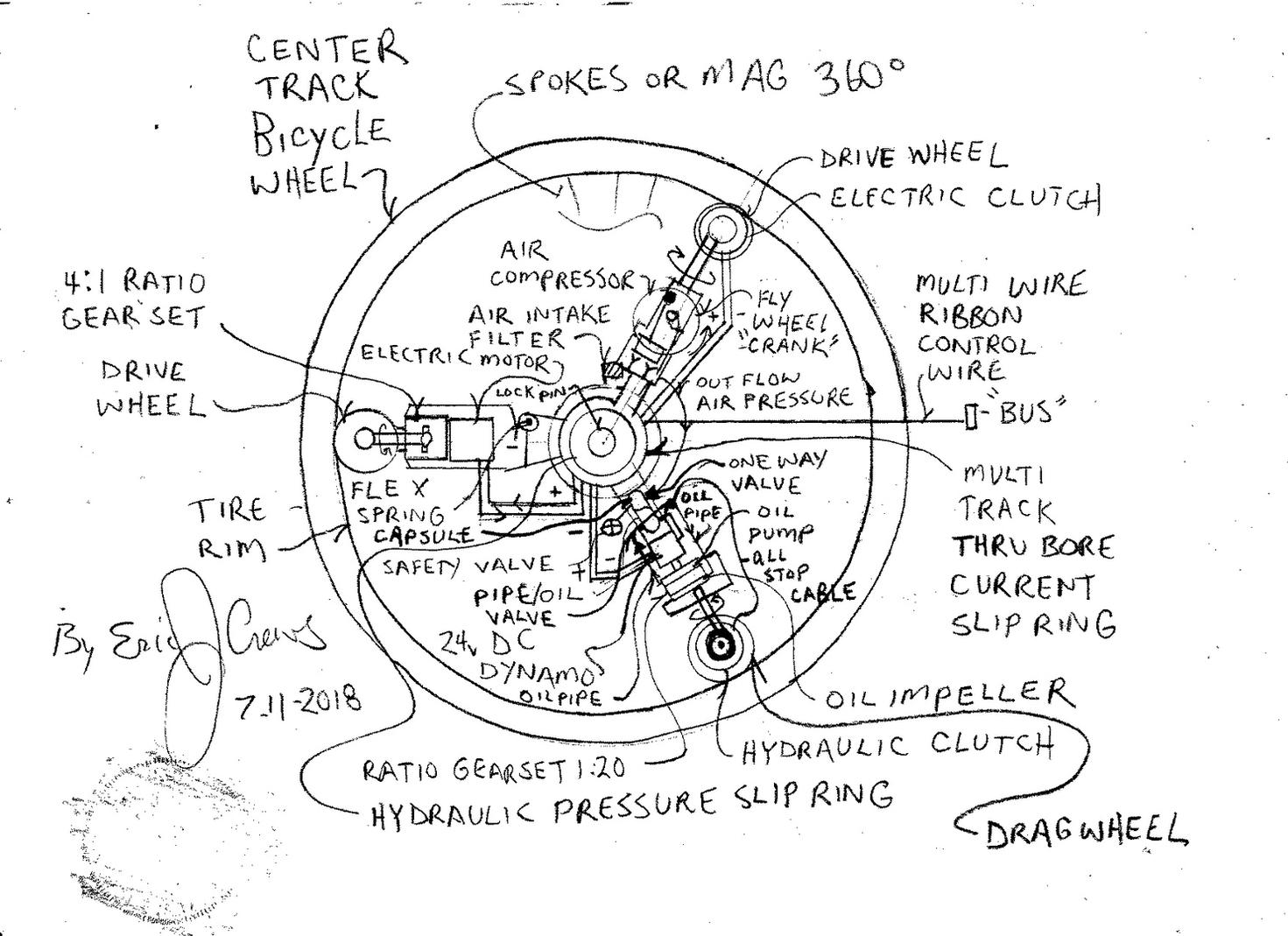 The following design system is then for an electric assist bicycle. The generator cycle is then sustained by the hydraulic clutch engaged.   The air pressure is regulated by the safety valve that will discharge pneumatic pressure when the combined component (oil / air pressure ) pressure tank capsule is at it's operating pressure  the out flow oil pipe then has an electric flow restriction valve to regulate the total speed of the generator cycle.

The discharge from the oil / air pressure pressure tank capsule is then directed to the hydraulic impeller and the hydraulic impeller's discharge then becomes the intake flow for the hydraulic pump causing a hydraulic draft effect to then sustain rotation of the generator system. The hydraulic pump returns the oil to the dual component ( air pressure and hydraulic oil ) pressure tank faster than the feed flow to the hydraulic impeller and is then causing a "hydraulic draft effect" causing rate of rotation incline accelerating the input rotation drive shaft and causing the drag wheel to drive the rim forward. While this is occurring the electric motor and the 4:1 ratio gear set electric drive motor is causing the forward advancement of magnetic  "pressure" by electromagnetism yielding total system speed incline. Velocity restricted by material selection of components.

the current is volt regulated by thew dynamo's internal voltage regulator and connected, via wires, to the thru bore current transfer slip ring to then be regulated/ controlled by potentiometer "hand throttle" then to be directed back to the thru bore current ( electricity) slip ring and on to the drive wheel's electric motor. The hydraulic clutch assembly then upon the drag wheel also contains a cable actuation connection assembly to then completely close the oil flow regulator valve upon the flow tube to the oil impeller acting so that when the lever is released that engages the drag wheel via hydraulic clutch the cable then closes the valve to stop the generator...

As an optional model the total trine assembly could then advance upon the core drive shaft located at the center of the wheel then propelling the assembly by additional two sprocket  / drive chain and electric motor causing high speed rotation.

Reduction gearing may also be incorporated in to the drive shaft system then at 10:1 with the 10 being of / derived from the rim gear and the  1 then being the out put rotation advancing the lock point lock pin about the wheel axle. The locking pin locks a tube axle then riding atop the core spindle with it's assembly supported by bearing races. The spindrel then held by the bicycle "forks upon both sides ( both forks).

The outer of the tube axle then with differential / planetary gearing upon the segment that carries the lock pin to accept input drive rotation from the 10:1 ratio gear set  and becomes the trine unit assembly forward advancement system. The trine unit assembly consist of the air compressor , the electric drive system, and the the generator system. The wheel then with only  one side support system ie a mag wheel with only one bend in spoke system ".

The design then with an addition being an additional assembly added to the trine assembly then making a quad compound wheel with an additional rotational drag wheel that causes an increase to the rim with rotation in tandem with the 10:1 ratio in the additional drag advancer that will then be able to advance the total interior system (quad assembly) by the drag roller being motivated by interfacing the surface of the rim upon it's interior circumference and transferring rotational torque to the 10:1 ratio gear set to then cause rotation upon a drag drive wheel causing an additional center wheel where the lock pin is located.

The said addition called a "roller advancer" and it's mounting then held in place by brackets connected to the other  components of the quad assembly. This allows the system to be placed between the spokes of a bicycle wheel with spokes or dual mag spokes upon the bicycle wheel. The assembly then upon the "quad wheel" then aligning about a circle at the quadrant points ( perpendicular ie. at 90 degrees from one another within the spoke cage). The roller advancer will also contain an electromagnetic clutch internally to allow for  "limited slip" so that , at high rates of rotation the drive line within the assembly is not pushed past it's mechanical tolerance ( shear ).

The assembly as depicted in the horizontal position then a  drive system for a Utility scale power plant. The trine rotator then motivating the armature of an industrial generator at a larger diameter in tandem with the armature of a Magneto then feeding electrical current to the Stator / field coil of the utility scale generator. The system with cooling fan assembly to keep the design cool.