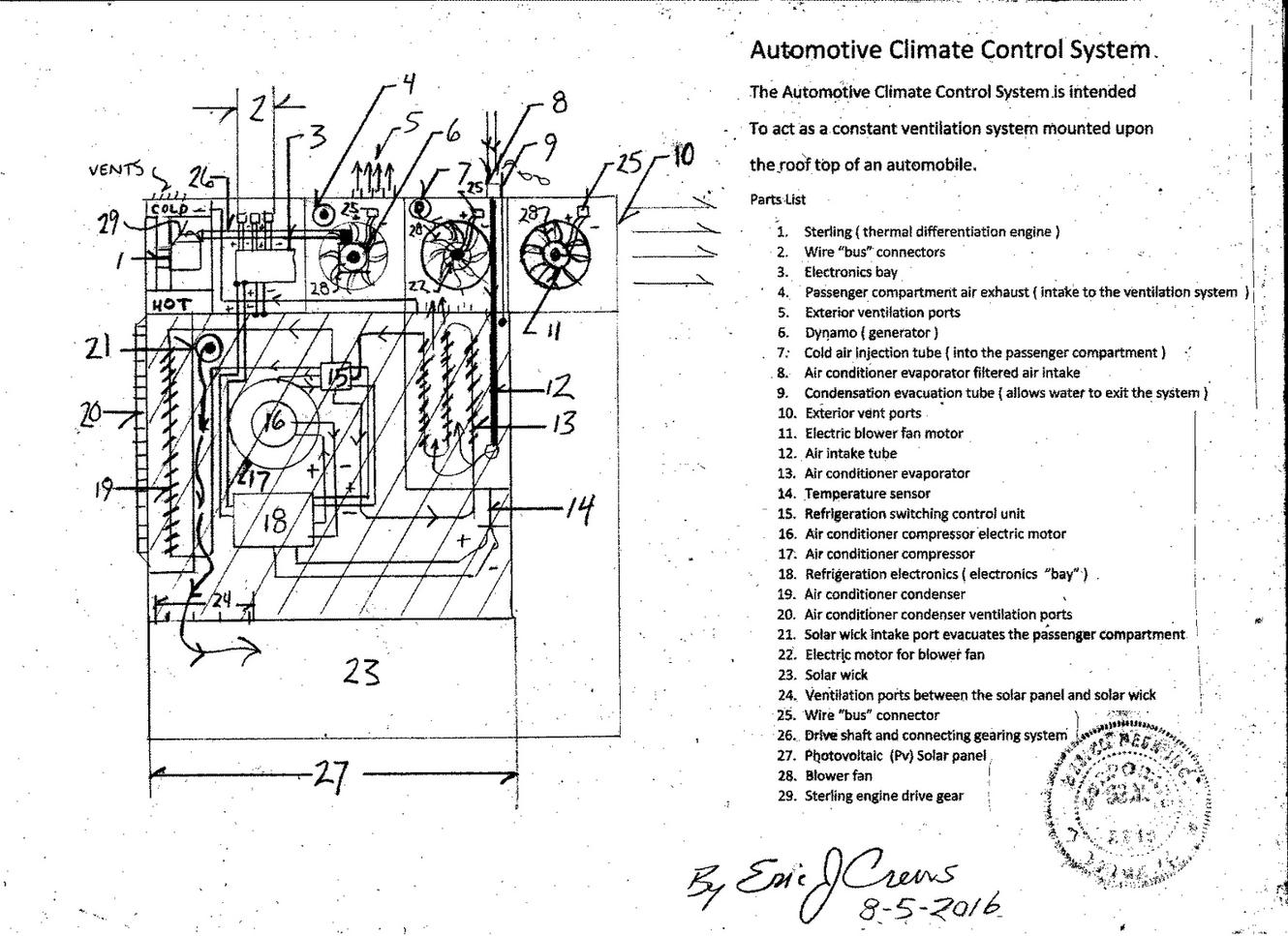 With so many problems involving infant mortality due to children being left in hot cars.. the following design systems is intended to act as a counter measure regarding the situation....

The design then has multiple pathways of operation ( ie redundancy ) then to better serve it's function.

First a "sterling engine cycle " then actuates ventilation of the passenger compartment of a vehicle via the thermal differentiation of hot and cold... in this design the cold side will be the ambient exterior air ( chilled ) once the system is in operation. The Sterling engine also drives the dynamo ( a permanent magnetic generator producing Dc , (direct current ) with the electricity then augmented and directed to the  Sterling engine's internal electric motor to increase it's speed and  final electricity output in number 6, the increased speed  to bring the electricity level output to the current level high enough to power the air conditioning system and the blower fans. The photovoltaic ( Pv)  solar panel also powers the Sterling engine's internal electric motor.. ( "start up" cycle ) .

The out side air the being the cold side of the Sterling engine then with the "hot " side of the Sterling engine system being derived from the "Solar Wick"
( solar wick ..like a green house that lets sunlight in and retains the heat , heating a subtrate  that retains the heat to then cause air flow by the natural tendency of hot air to then rise )

The dynamo , number 6 then powers the refrigeration system force cooling the interior and operating the blower fans. The refrigeration condenser then also will aid in the heat for the "hot"  side of the Sterling engine system.

The Photovoltaic  (Pv ) solar panel also then provides electricity to the system but works only intermittently ... It will also power the electronics and provide electricity for the refrigeration system. The ( Pv ) is then not solid solar cell it is the diagonal stripped with a transparent  "clear" safety plastic lens to allow sun light to heat the substrate in the solar wick.

Sterling cycle thermal differentiation engines do not produce much initial torque ... however with a compounding magnetic pressure with incline ie. the low current level then stepped back into the sterling system it self will then allow for more rotational velocity . The circumference of the fan number 28  then being driven by number 6 is then an alternator... with variable stator intensity ( will slowly incline when sufficient speed has been reached ) as proportional to the rate and velocity to then allow the " baud / loading " of the air conditioner conditioner compressor's electric motor.

*Note - Even with this design installed it does not mean it's safe to leave the children in the car on hot days......

* Note -   The " lid " of the system hinges ( hinges then located upon the drafting's line between the labeling of numbers 23 and 27 ) to allow for cleaning the interior of the
system. The hinges then being located at the bottom of the design as depicted that will become the forward leading edge when mounted atop the roof of the
automobile. The "lid" will then contain the solar wick and Pv panel. the lid will be secured when in operation via screws and lock washers with lock nut retaining bolts..

* Note - The passenger compartment also has the control panned the exposed into the center interior of the passengers compartment just behind the front seats accessible from the
drivers seat yet not obstructing the view from the rear view mirror.

* Note - Number 1 may need sonic dampening foam to insulate the noise produced..... by the Sterling Engine

* Note  - As an option a cell phone app then allowing an alarm to notify the Adult driver that the car's interior is too hot.. ie. the air conditioner will give you a call on the cell
phone... and then allow interface to actuate the cooling system.