5. permanent magnet aligned to cause repulsive fielding to cause the slide deck number 7 to oscillate

9. electrical current pick up ( fixed to the base deck ) "armature"

10. fixed permanent magnet ( fixed to the base deck ) to then induce electricity upon the slide deck and

excite the field coil to then cause the "armature , number 9 to then energize the electromagnets, numbers

electromagnet ) to begin to oscillate and continue doing so

the slide deck to begin oscillation

15. slide deck connecting brace ( allows for the coil sprigs release to then move the slide deck "brace will

also then remain in motion when the deck , number 7 is oscillating . One spring upon each side of

the "brace" , also then acting as a slide deck maximum travel limiter by the fully depressed coil springs.

Currently cell phones and laptop computers use lithium batteries. The batteries energy density at times can make the batteries hazardous yielding  thermal  or explosive results.  We have addressed the problem then designing an "on - demand" generator to then also does not require a charging period as this is a time issue making it a un-nessary  activity daily... think about it ... over the course of a year... how much time then involved with the charging of a phone?

The design is  is based upon linear  generator to then cause horizontal oscillation then increasing the lateral rate via current increase to  electromagnetic the with their fields aligned to then repulse to produce electrical current by amplifying an natural magnetic field via electromagnet to then "bounce" the armatures of additional linear generators to then yield a usable electrical current level to power a phone continuously.

As then slide deck ( number 7 )  the contact points then directing the current to amplify the magnetic field upon the slide will then align to then cause the on / off, of the electro-magnetics circuit to then yield  the circuit to adjust the magnetic field to allow for lower field in the intensity that the direction that the slide deck is then traveling in and when at maximum distance then to pulse burst current to the the  "slide deck " in the opposite directing . This causes oscillation and then yields high rate of oscillation. the maximum rate the controlled by potentiometer then limiting the current to the electro-magnetics also with diode  and resistor ( upon final circuit design ), upon the circuit to the also restrict the electricity level.

An additional circuit may be added into this system to then increase the initial pulse of magnetism (via multiple capacitor discharge increasing the current to the electromagnets). This then increases the intertia when the system starts then holding the electrical charge from its prior cycling.

The design can be made this and small enough to then be installed within a cell phone to then fall in line with the current design trends.

The same "bouncer" type system may then be in the shape of batteries to fit into existing components battery size "A" "AA" "AAA" "C" "D"  and 9 volt formats. the alternate design then with a 2 directional solenoid and and 2 to 4 linear generators for the round batteries and for the 9 volt battery format  would contain 6 linear generators producing 1.5 volt per linear generator. 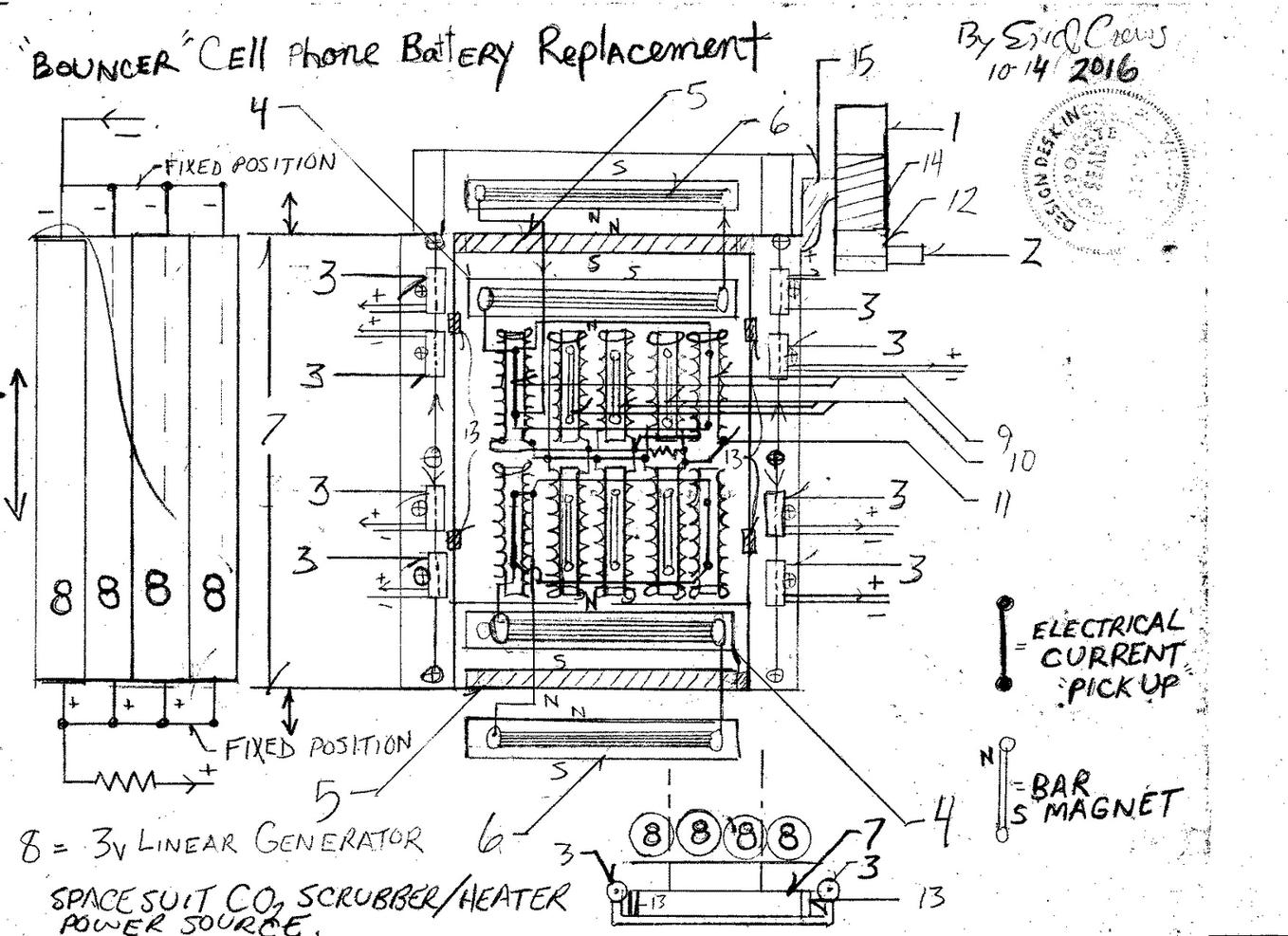