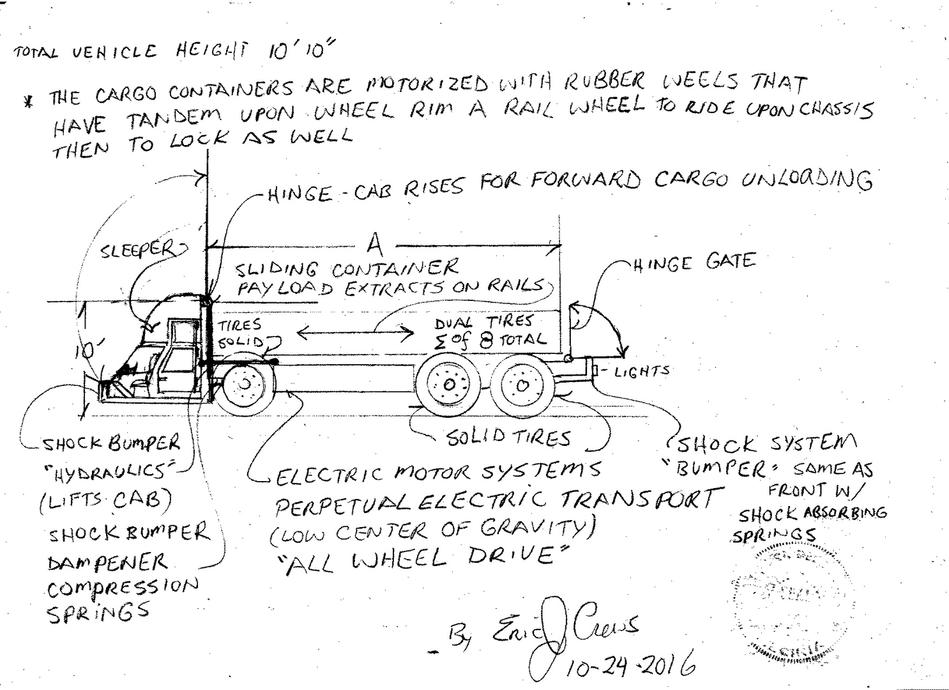 This design is intended to make shipping via the highway system safer for all by causing a lower vantage for the truck driver ,  ie better visibility at the the same height ( vantage point ) of most standard vehicles upon the road. The design also then has a lower center of gravity causing less top heave effect yielding better handling. ( front wheel steering ) The power plant within the design as the "Exciter X Type" ( http://www.designdeskinc.com/exciter.html )  with dual electric final drive motors and transmissions ( 2 motors two transmissions ).  An electric clutch system allows for selection between either of the final drive systems.

When moving freight loading and unloading are financial logistics. ie the design upgrade saves time and money when moving commodities by increasing the speed with which the products can be transferred to and from the truck.

The AWD  ( All Wheel Drive ) system then also ensures greater road stability in inclement weather. When fuel is not required for this vehicle design to operate it becomes then also cost effective to invest in a higher range of capacity and performance of the transport vehicle.

Cargo container extraction may then be either direction exiting forward or to the rear of the vehicle. The container then itself a self propelled mechanism driven then by attached umbilical remote control device.  The rubber wheels then able to swivel 360 degrees for easy placement of the container in desired locations.

The doors and then also attached to a hydraulic piston system to then safety the doors as they are reversed hinged. So that when open  the piston rod of the hydraulic system then rigid the doors position ie. makes the position locked to the piston assembly so that any unwanted accidental impalement  by another vehicle then causes the door to act as a force deflection not to harm someone then getting into the truck. A hydraulic piston pressure release control system is then depressed / actuated to allow the door to close with ease...

Upon the interior rear wall of the cab of the truck then exist a video display monitor attached to a camera system then displaying the active situation regarding the road behind the truck  so that a standard rear view center mirror will also then be installed upon the center of the windshield of the interior of the cab of the truck. The truck also has dash video displays  with "blind spot" window  displayed upon the video screens and additional cameras each side of the truck  ( sum of two / for each side of the truck ). Traditional side view mirrors are also standard equipment ( Sum of two / each side ).

The rail assembly upon the chassis may also the lift vertically ( above the wheels ) and rotate 360 degrees for side unloading . There will also be upon the over hang when rotated about  from zero degrees then extending feet to support the "overhang"  upon the ground ...then also  mounted  to the rail structural support system.   The actual frame will also have hydraulic support feet to the stable the truck frame / chassis itself . The multiple hydraulic  stablezers  ( sum of 6 total 4 mid frame one aft , one forward ) will be used before rotating the "rail system " to unload the payload.

The payload container has a fixed cover above the slide container and is mated to a rigid steel support frame that  becomes as a roll bar for the advanced automotive transport truck.