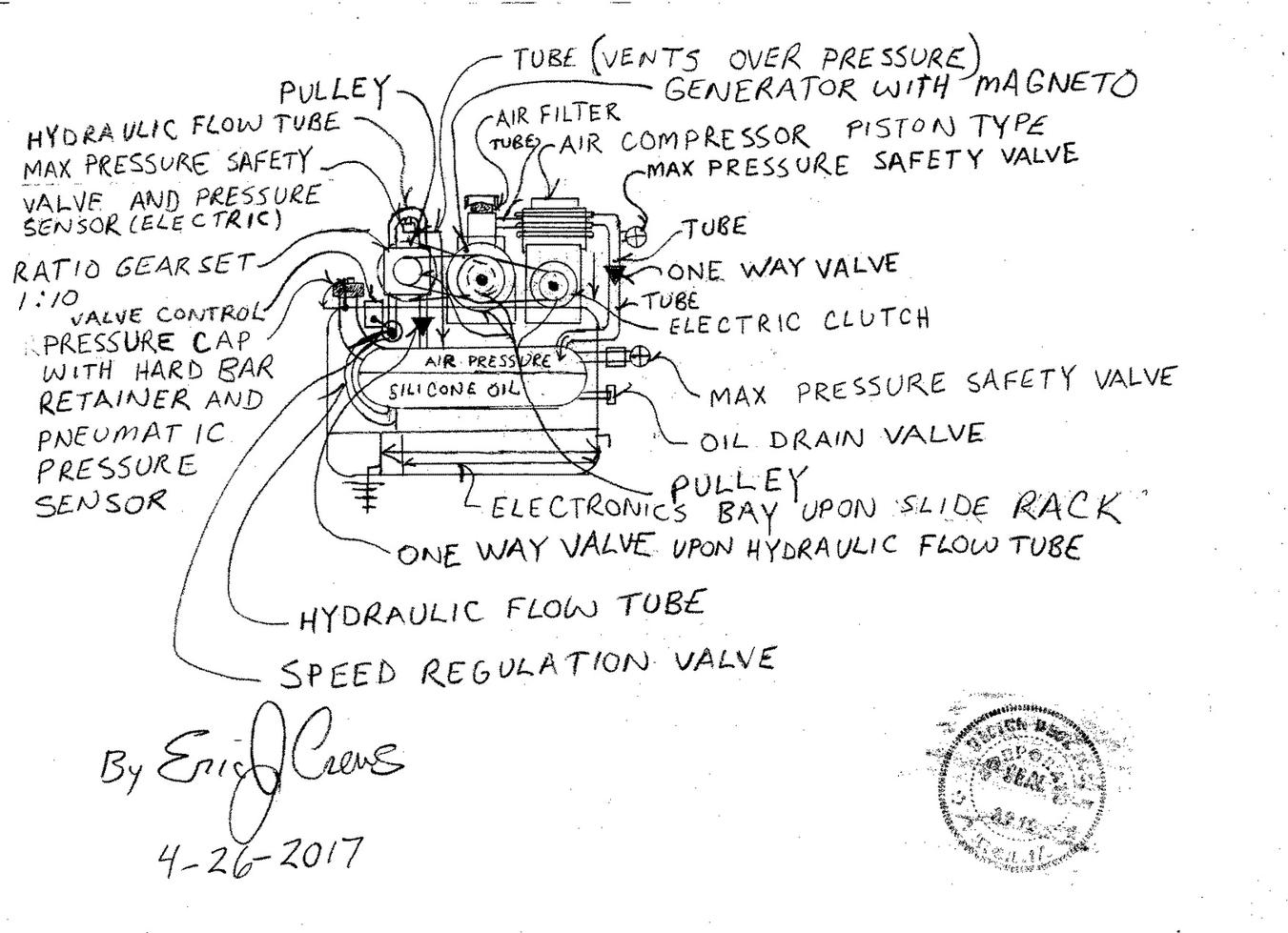 The following design system is intended to replace the Utility "grid" electricity service with an alternate method of electricity production at high electrical current density. The design is high density high voltage production.

There are a total of three drive belt upon this system then motivating the pulley. The large pulley then tandem rotating with the low side of the ratio gear set then causing rotation , via drive belt, for the armature of the generator with  magneto. The opposite side of the generator then  having two pulley with one belt then transferring rotation to the  high side of the ratio gear set and the other drive pulley upon the opposite end of the generator and magneto assembly then motivation the air compressor . The pulley ( sum of 2 ) are separated by electromagnetic clutches to allow for system slippage as not to bark the belt... this also allows for gentle incline regarding the forward advancement of the systems total speed.

The generator for this system is gas sealed with inert noble gas ( Argon).  The electronics control boards contain a surrounding Faraday's cage and  correct ventilation  ( containing blower fans ) to cool the system.

The flow tubes also must be grounded and shock casings upon the stainless steel compressors and pumps.

An additional electric motor may then be added to the low side rotation of the ratio gear set then powered by a percentile of the generated electricity in the high voltage generator. This allows for "baug" compensation and increased overall speed also allowing for the system to operate at lower pneumatic pressure reducing the fatigue upon the air compressor.

The design will allow for external high voltage electricity ( volt regulated ) to as circuit breaker box.

The "run speed" of the generator system is then extrapolated from the current output of the generator also with safety fault to cause an "all stop" if the system has component failure. The circuit then monitoring prior to the voltage regulator also then designed not to damage the main voltage regulator.The component then measuring watts controlling the R.P.M. of the generator by adjusting the current to the electromagnetic clutches and the reintroduction of electricity to the additional electric motor within the ratio gear set and adjusting the hydraulic fluid flow restriction valve lowering the volume of fluid available.The "all stop" function will also close the hydraulic fluid flow at the dampener valve upon the fluid primary flow tube then reducing the intake volume of fluid to the ratio gear set's "counter tilt" hydraulic impeller.

Following find the system with the ratio gear set's internal "counter tilt" flow system illustrated. The smaller lines from the hydraulic flow valve then being tubes then venting pressurized fluid into the high 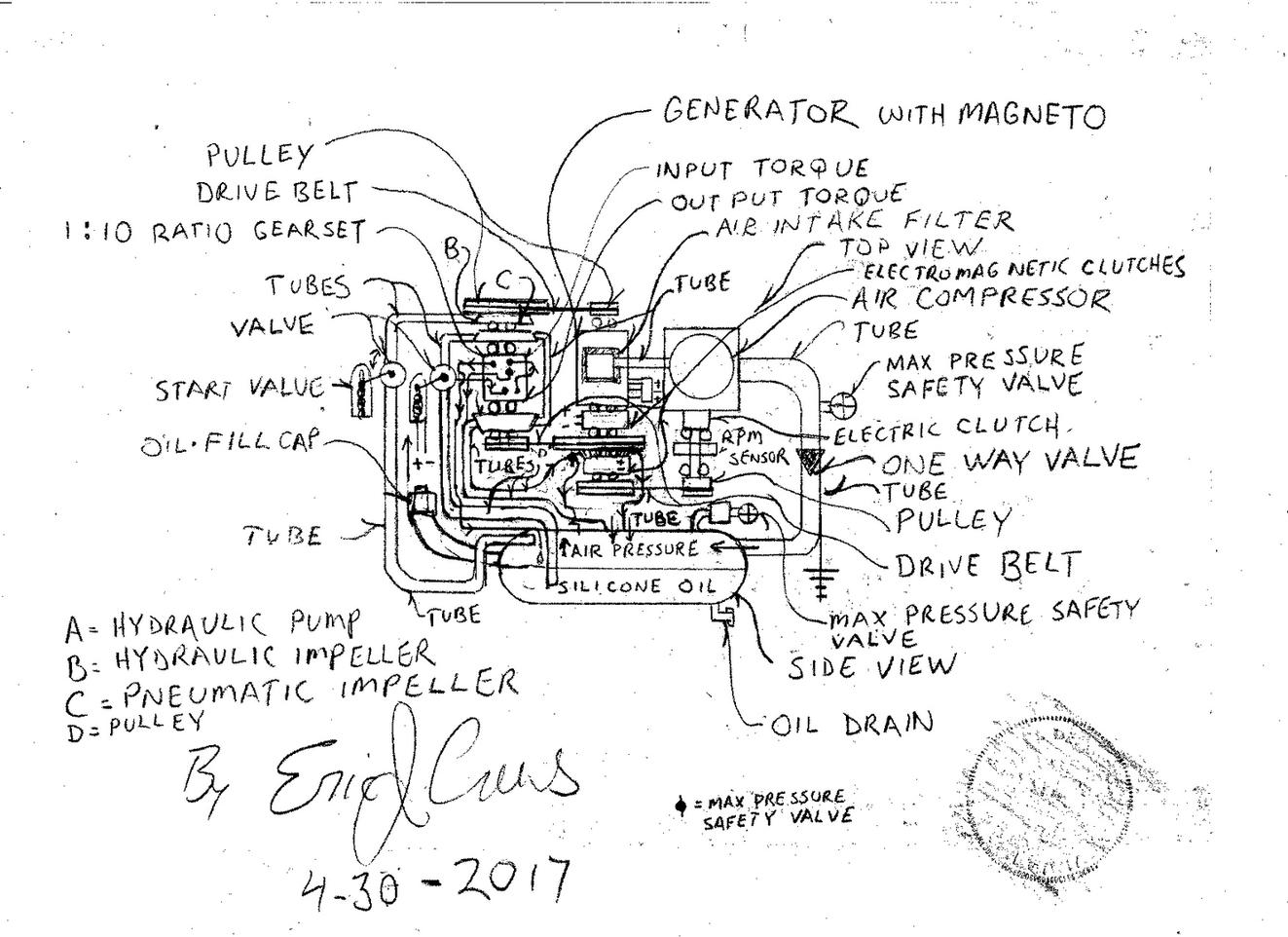 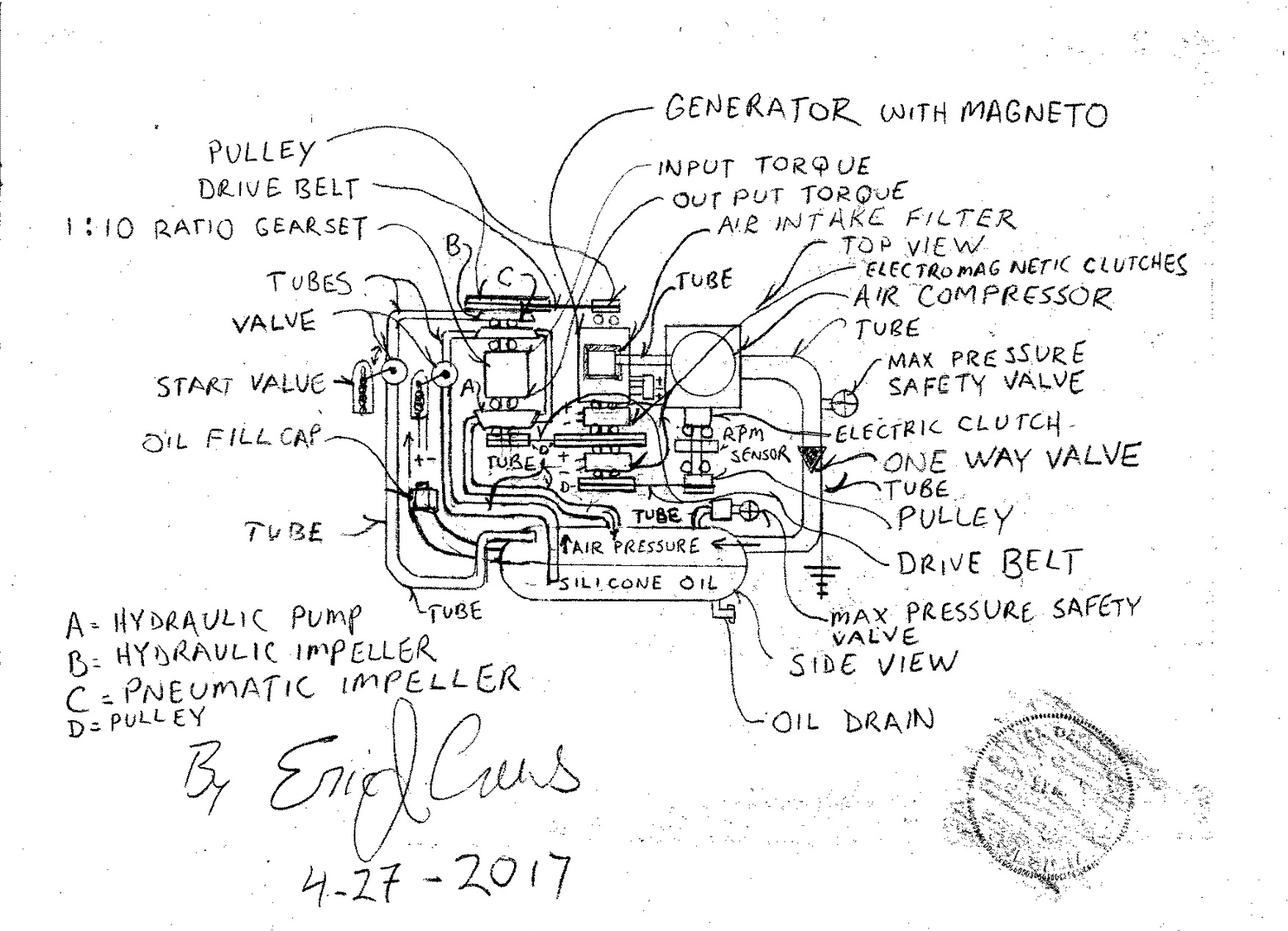 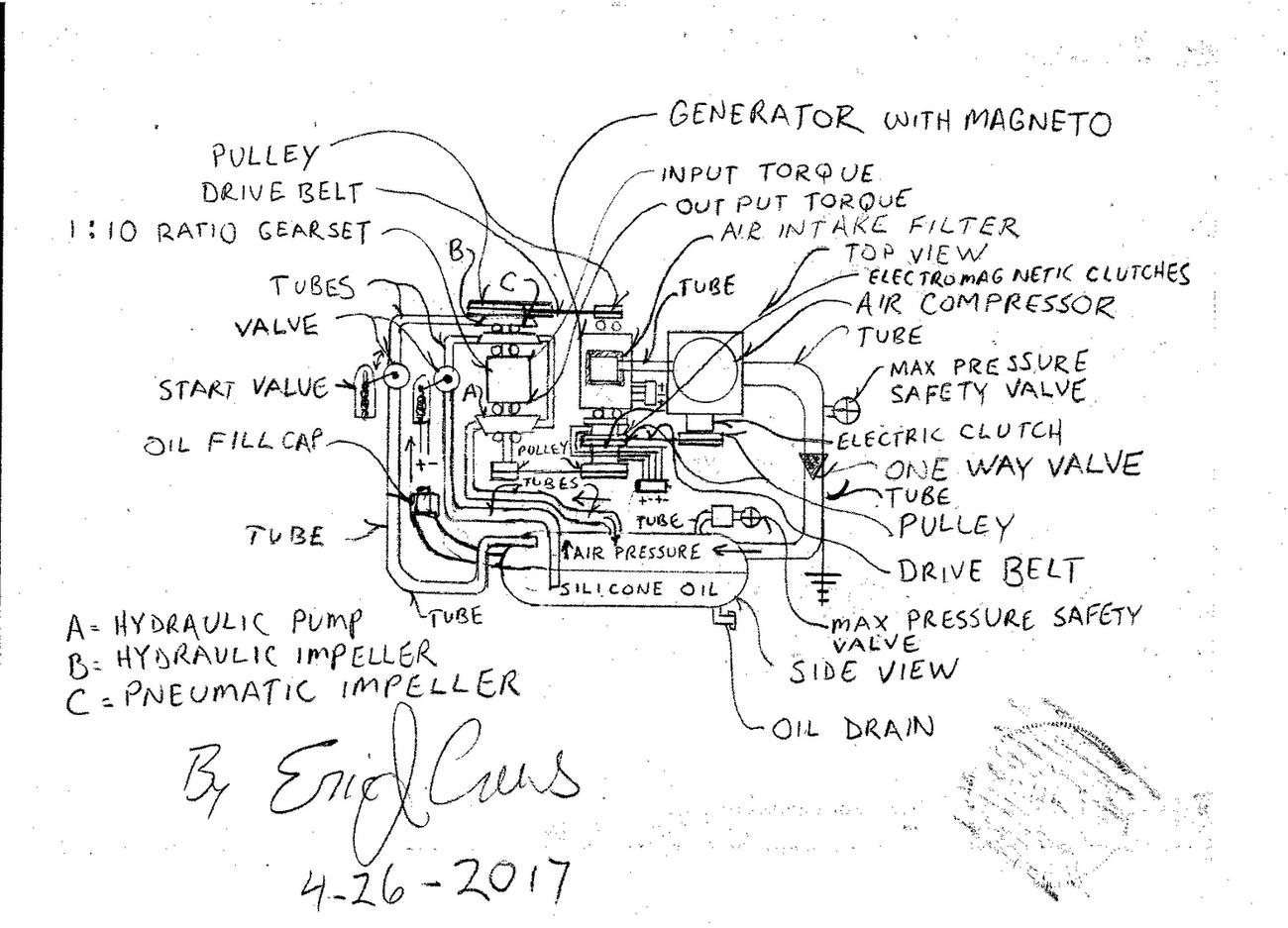 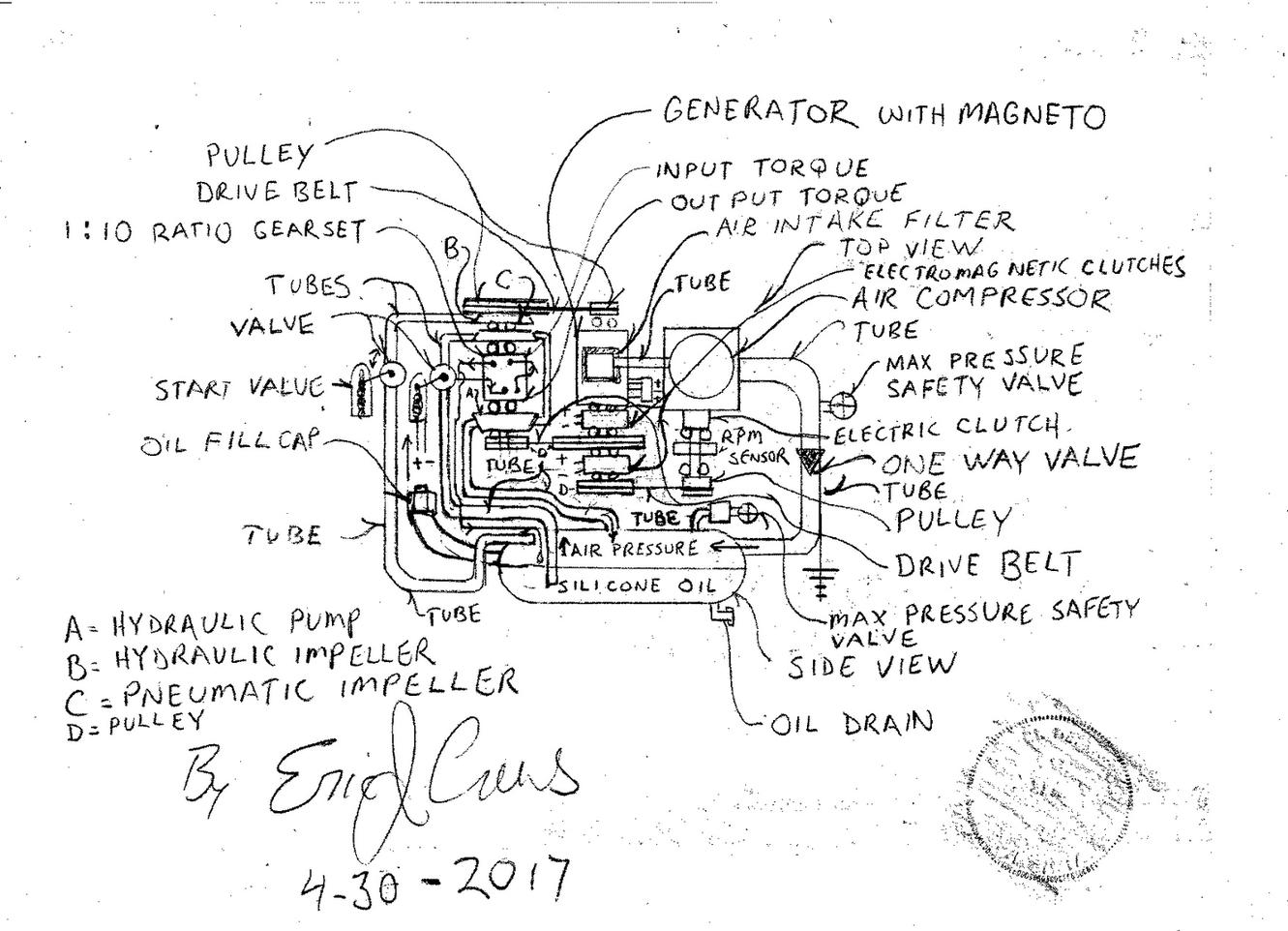