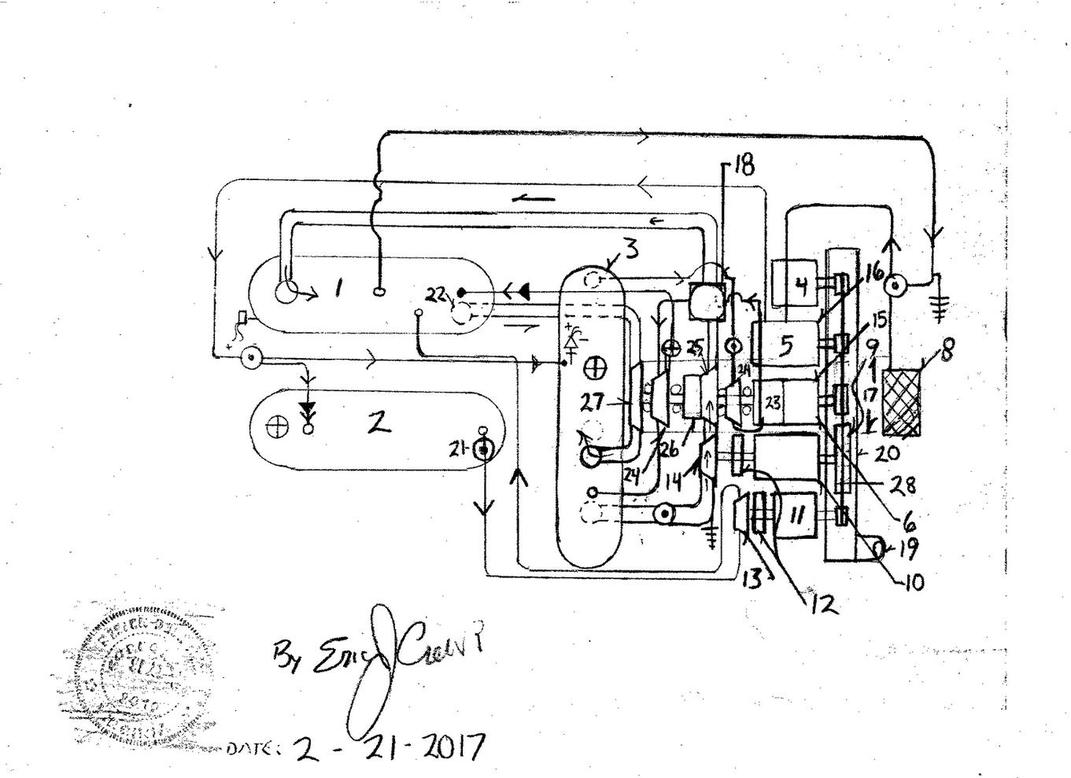 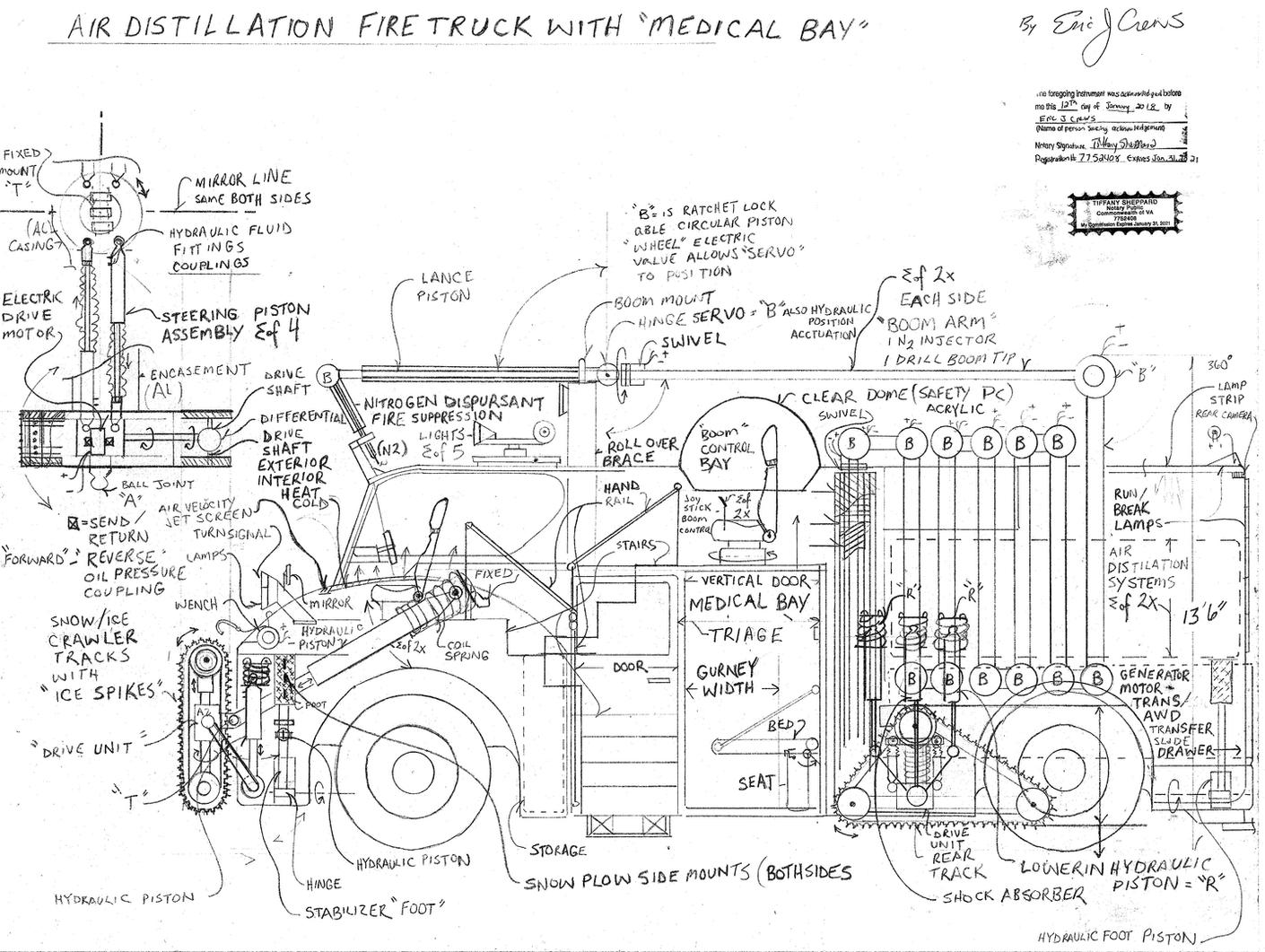 In certain conditions the use of water in cold temperature then becomes cumbersome to use for fire fighters when having to deal with an out of control fire.

The fire hydrants, ladders and hoses freeze in cold weather making them essentially useless... The alteration of method with the following design, then to mitigate house fires or wild fires in extreme cold implements Nitrogen distilled from the air with an active distillation platform upon a fuel less fire truck.

The advanced vehicle then not to store large volumes of Nitrogen but rather have the capacity to produce large volume of the inert Noble gas (N2 - Nitrogen) on demand to then displace the Oxygen feeding the flames. The air distillation system then redundant upon the vehicle with low storage as not to then become a hazard of the storage of the "gas" (N2).

The propulsion system for road travel then by fuel less electric generators making the fire truck an "active" generator system powering the electric drive train for the truck and the redundant air distillation system. The power plant "fuel less" generator system [sum of two] will also have the capacity to route the electricity to external application to then serve  other function in disaster mitigation or "as a power supply" source for a hospital etc... if and when the hospital looses electricity due to natural disaster.

The fire truck then also slightly smaller than many current versions with an all wheel drive capacity for rough terrain.

Fighting fire takes great strength to then also be able to handle the water hose.... as an option a back pack with electrical assist then also powered by the "backpacks" electric generator to then use an articulating servo assist "arm" to handle the fire hose.....

The nitrogen system's discharge hose (also with  pneumatic puncture "tips" to punch through a roof ), to then inject the Nitrogen to suppress the fire.

The hose with the tip then placed by "boom arm" upon the advanced fire truck also able to extend into the room below the roof through a ceiling.

Because the advanced fire fighting system then is intended to operate in harsh weather conditions. The system will implement an additional drive system being crawler tracks equipped with ice spikes upon the tread of the track drive system.

The track drive system then dual front crawler tracks that have the ability to change angle actuated by the steering wheel. The aft track system then resemble a bulldozer track system also with ice spikes upon the tread / tracks rubber feet . The rubber "feet" then atop the linked metal plates that inter lock to form the track "belt".  All four track crawler track system have the ability to "retract" and dis-engague the road. The design  then allows for travel in extremely harsh conditions.

The vehicle is also equipped with a medical "bay" that will accommodate a gurney and medical triage "field" unit.

This essentially making the "fire truck an ambulance as well...

The truck also is able to act as a snow plow itself as the additional plow attachment will be able to mount the front boom arm truck stabilizers.

The dual "boom arm" with hydraulic and electric positional servo motors ( contains electric valves), will be able also to attach detach the N2 ( nitrogen head tip injectors  ) or switch to a drill bit system to "thru bore" through the brick or concrete walls to inject the nitrogen with the adjacent boom arm. The dual boom arm system is then redundant  ( inter - changeable tips ) upon the truck to insure if fault occurs the system will have at least one boom arm operational.

height to pierce the roof....

The "boom arm" then with sensor assist system to then align the "boom arm" for storage making the task easier for the operator. The same sensor system the also to prevent damage to the "boom arm" when extending the nitrogen fire suppression injector so that the extend sequence does not allow the "boom arm" to damage itself due to an operator's mistake....

The design then also has a tow capacity to then pull a trailer with a multitude of trailer attachments such as a street sweeper, leaf collector, trash collection, recycling collection  etc... the availability for the trailer to then also have power ( electricity ) feed to it then for the trailer to have the required ability as per it's intended function to power lift servo arms , blower motors etc... will then be upon the aft of the air distillation fire truck.A receptacle then to receive an umbilical cord containing also vehicle lighting circuits for run lamps and breaking indicator lamps also included for the trailer.

Parts list ( please also refer to the "key" in the upper drafting)...


5. air pump / vacuum producing... when the valve is in set position also can pressurize the air tank.


10.  High Voltage Ac ( alternating current ) generator  ( 100Kw or greater) ,with magneto for field coil stator feed current and internal voltage regulator ( voltage regulator able to be exchanged from the exterior of the generator with fault sensor and warning lamp on the dash


13. pneumatic  "Start" impeller may be a piston type impeller with sealed lubrication


16.  air pump / vacuum pump  electric clutch ( note- the compressor does not need to "run" all the time


24. hydraulic impeller then receiving the increased velocity flow from number 18 the  "4" of the 1:4 ratio rate of oil flow


27. main hydraulic pump ( high speed high volume) containing a one way valve upon the intake orifice and internal 1:20 ratio gear system so that the pump "wheel" is then rotating at 20 times the drive shafts input speed.

* Note -  The max pressure over pressure pressure relief valve  ( safety valve vents to the exterior of the system into the air ) upon number 2 then also contains a one way valve to allow for manual filling by manual air pump ( filled once at initial starting or post component repair where the air pressure system has been opened then restored.

The electrical reintroduction system is also energized and is applied as soon as electricity becomes available then increasing electrical current to the electric drive motor , number 6, being powered from number 10 post current voltage regulation and potentiometer ( controls the base idle rate of the generator) .

The system is"load reactive" then increasing the current to number 6 when power is demanded from the generator number 10, by the 150hp electric motor connected to the vehicle's "drive line".

* Note - Connecting lines as indicated in the "key" are flow tubes.... the main line pipe "tube" is a tube with grater diameter...

* Note - Number 9 ( large sprocket ), can be in either of the two depicted locations.... ( ie. upon the assembly drive line containing the electric motor or the assembly then containing the generator. The system will function with number 9 in either location then yielding different performance dynamic.. one position will then cause a greater draft effect of hydraulic fluid the other then causing a difference in response upon loading...

* Note - Number 20 will contain venting allowing for air to then transverse....

* Note - Upon number 3 the max over pressure safety vent ( vents pneumatic pressure at level when the system indicated the tank has reached operating limit then to retain air pressure within the systems operating parameters ...also is the silicone oil fill by unscrewing the over pressure safety valve and filling the combined component tank with the silicone oil then with the tank filled to the correct oil level  reinstalling the safety pressure venting valve  to the correct torque setting  allows for the design to cycle the oil long periods..

* Note - Capacitance dissipation to control any static electricity will also the be able to safely discharge any unwanted electrical current the forming with in the flow systems as motion then builds charge electrically and must be controlled.

* Note - The design system has redundant safety valves ( over pressure vent valves ) in multiple locations to the vent the pneumatic pressure....

* Note - The systems speed is then regulated by the logic circuits referencing the R.P.M. ( revolutions per minute) sensor.


drafting ( pulling via suction ) pressurized fluid across an incline of gearing with a counter tilt ( counter force ) fluid flow  ( via impeller impalement) to then yield sustained  high density high voltage Ac electricity... with the reintroduction of generated electrical current to the assemblies electric motor then increasing velocity ( as load is demanded ) yielding more electrical current generated.

The electric motor , within the drive line assembly, to then advance the zero point of magnetic


pressure ( current in the electric motor..causing equal pressure forward at all levels of increased incline / rate of rotation), ...then compensating for loading of the generator by additional motor , providing


power ( electricity), for the forward electric motor connected to the transmission propelling the automobile.

System parameters / function are automatically maintained by the electronics in the system mapping logic control circuits.

When drafting fluid through a closed tube a suction effect is produced by multiple factors.. first the circumference of the pump pulling a given unit of volume then measured in cubic centimeters per unit of time... then the same volume of measure ( mass of fluid ) within the same time interval then being pulled across a smaller hydraulic impeller proceeding the pumps intake. This causes a rate of velocity increase.

Along with this a dual stepped incline then by ratio gear set with resistance hydraulic counter tilt ( a force counteracting flow ) then to cause greater speed of the pump with the ability to omit the resistance in the force equation then yielding greater rate of rotation.

The additional velocity increase by drive chain and drive sprocket system also causing a rate of rotation increase. This yields a a "run away" effect with the generators resistance ( produced by the stator / field coil ) then also nullified in the force equation by the basal pressurization of pneumatic pressure within the combined component pressure storage pressure tank number 3.

In this design the additional electric motor then being the 150hp electric drive motor connected to the automotive transmission..

High velocity components encased in "shock casings" to prevent injury from manufacturing defect or component failure causing projectile. The material selection for components  then of stainless steel also then with the pipes coated in electrically non conductive insulation.

( The term "baug" is then defined... a slowing effect of the generator when electricity is demanded from it...)