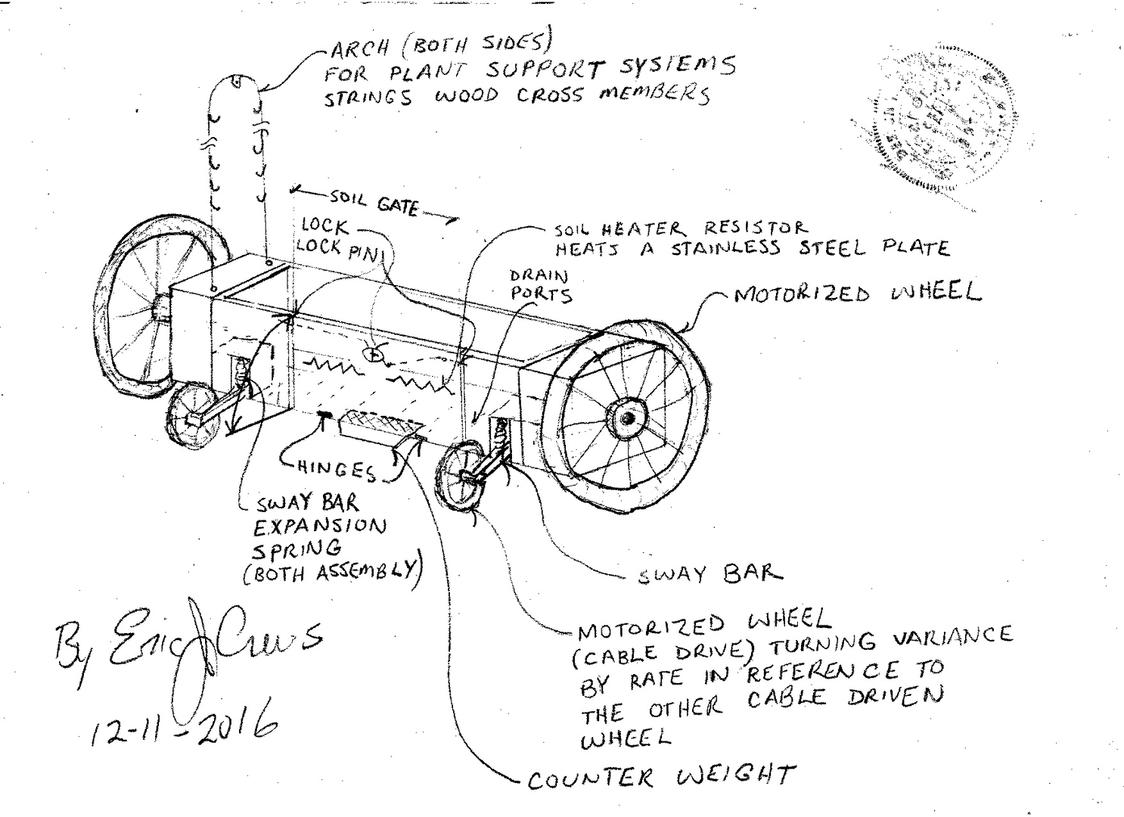 In the current situation with inclement weather and increasing radiation levels due to erratic magnetic field and water availability... the adaptation of mixing an "Assembly line", type system for agricultural Produce then may be advantageous for stable crop production. Avoiding crop loss due to storm / drought / disease / pestilence ....., is a good financial decision for the farmer.

The "assembly line" system would then free crop production from a "fixed" / "planted format" to then allow motion to the produce within controlled conditions. With the energy availability then no longer being a cost issue, the additional system will then  cause a "rolling" increased  " farm field " space then increasing causing an increased field acreage...

system ( reducing the cost of operation ), may then allow for increased constant yield then avoiding many conditions that effect the crop. Additional artificial lighting will also be contained within the system to maintain the growth rate of the produce then caused by plant lights electrified by fuel less "hydraulic draft cycle" generator systems.

The adaptation will then keep pace with increasing population with a more stable platform.  A micro "greenhouse" with a conveyor system to cause a " rolling acreage " then also increased the stable production of the produce.

The system will be able to the "grow" the mechanisms constructional components to then increase the over all system size with minimal financial addition... ie. the frame  ( rigid support system), then produced from plastics that are then of the yield of the produce... additionally mechanical components, pneumatic impellers, connecting "rods" , pneumatic pressure piping, roller tracks , roller wheels, inter linked conveyor "chain / conveyor belt", etc... then are able to be derived from cellulose acetate thermo-plastic resin composite ( oil , for lubrication and required hydrocarbon stock for  the plastics, derived from algae bio reactors ). The plastic cover may be designed to shield increased  solar radiation via material selection properties.

* This system then allows  for constant run harvest ( if large enough ) or increased production allowing for a 365.25 day growing system.

Water recovery / water feed pumping system also incorporate plant food feed injection into the the water feed pipe. Automated unloading may will then also be tandem with this system then having  personnel to inspect the produce before shipment. maximum width 8' feet and upon a tractor trailer  4 will fit at 10' long per unit... is assembled from the construction kit then from grown components its easy to handle the size also allowing mobility...

The adjustable feet  ( sum of four per unit ), will then allow the contour of the ground to be adjusted for for the mechanism correct operation....( mirror line in line with the conveyor)

The plant lamp grow light system will then be continuous running along the length of both vertical walls of the  greenhouse.  The lamps will compensate for low light when overcast sky occurs.

When seeding the system it may be so that it is done post harvest ( upon the conveyor) ..to then grow the seedlings or adult plants upside down to then also have under lighting drainage and water systems.. an oval conveyor track productive both directions... This increases the product volume per square foot.... The system may also contain an automatic seed inserter ( planting mechanism) ,  so that the carriage pots then locked into the main conveyor may retain the soil upside down by the retained material of a weave  ( organic /  non toxic )  and retain the soil even when wet.

The following design then being an  AWD  ( All Wheel drive ) mechanism will allow for incline to be compensated for by the counter weight then at correct weight levels referencing the plant average height. As a gearing function regarding the loading of then composted soil will be then to be able to dump the soil box automatically to then accept the cultured soil for then next growth "run".

Additionally by using " motorized planters ", a crop in the field then may become mobile . Currently the electronics can then implement with sensing systems to drive the units, without collision is available. This will allow for then design system to drive itself to water stations or then into shelter, if be required, to then protect the plants from storm damage or excessive high or low temperatures.

The design then will come as a kit  then with small plastics extruder to make the boxes / planters on site then via mail ordering the hardware components. The sale of the excess boxes then will allow for the cost of the hardware ( motors / gears generators accessories ) then to be "zeroed" in cost. Small algae coils then can provide the hydrocarbon feed stock to produce the plastics in tandem with natural fiber from the farm's waste.

The advanced design then being driven by a fuel less  " Active" on board generator system (http://www.designdeskinc.com/hydraulic-draft-cycle.html), electrifying a motor system with proximity / guidance sensor system, then will allow for the design to drive itself to the watering  dispenser for correct level of hydration  factoring the type of crop then being grown and return to the planter's parking space in the field....

( manual removal ).  The "dumping" function then may also be used to culture fields,  then automated, by then placing soil upon barren ground that will support plant life systems. The design then acting as a motorized wheelbarrow.

The arch support system may also be enclosed and act as a greenhouses themselves.

The watering system would then cause  a "docking" alignment and allow for water spray heads to then enter the base of the canopy through a hinging flap with the spray heads terminal end the curving down ward slightly with multiple water ports upon the top of the curve. This allows for easy access and prevents the flap from getting stuck upon vehicle retraction when pulling away from the watering station.

The canopy also then will have venting at the top to allow for evaporation.  Sealed systems to add to this cycle where water may be scarce to " tread " the water will then be an additional unit that does not allow for excessive humidity to then saturate the greenhouse "tent" . This will prevent excessive unwanted growth such as mold / mildew etc...

The mobile units then may drive to be parked in an earth covered trench  ( containing  earth load support frames ) when high storm may be approaching... also allowing for winter growth cycles...

The extenuating vine then also able to be affixed to the string system then not to be damaged if in transport.

For heavy produce , melons, pumpkins, squash etc.. the system will then also implement a produce carrying rack to then also support the vegetable / fruit safely...

the racks will "spring clamp" to the planter for quick exchange of a full rack to then reset for the next planting cycle... the full rack of produce then moved on to inspection..

The sheathed ( sealed lubricated / greased ), cable drive system then causing the motivation of the small wheels upon the sway arms will then be a flexible drive shaft then locking into a rotational torque transference gear system to then yield the rotation of the wheels by an electric motor motivator that has the ability to cause rotation also in a forward or  reverse direction.

The larger wheels at the terminal ends of the planter are also then able to rotate in both directions.

The speed settings then factoring the maximum required torque settings with then, including gearing, will allow for load capacity to then travel at reasonable rate of travel ( factoring topographical incline)  while loaded.

For field planting,  ( Co2 sink - CO2 sequestered in the root system of certain scrub grasses ), the soil gate is then lowered to then accommodate the drag planter with the seed reserve then placed within the planters recess.

Tall wheel models ( varies to plant height ),  will then also be able to accommodate a water tank and water distribution system then be at less expense for the farmer compared to field irrigation and or center pivot systems,  when the mechanism will automatically water the field then collecting water from a main de-humidification system with sealed well reservoir / ( that extracts "clean" water from the air ) .

So much land in rice production is effected with arsenic and other contaminate, ...by altering the method the correction may occur.The wells may also be filled post water cleaning from rivers ponds etc.. post ( after ), distillation! via fuel less pressure cycle generators ( to boil to steam then condense to water), to increase the volume of water for agricultural use.

Additional planter insert tools then may also be added as task on the farm require many implements. Some as follows;

Sod collector ( for field planting then to collect the seedlings to then culture in the conveyor greenhouse system).

Additional tools thrashers ( grain harvesting and mini combines then using multiple planters one trucking one with the mini tool.... ) on and on...

Using these systems in tandem increases the density / volume of produce per acre allowing for constant run production.

This allows for repeated field plantings then collecting the young seedlings repeatedly in the geographic location / agricultural zone when the environment will then allow for the correct temperatures for seed..

ie... instead of one planting or two plantings the field then used for multiple short cycle plantings then using the sod collector loading into the conveyor system to culture the plants until maturity... The soil will then also be reconditioned when relaying the field with enriched soil.

A  oval  motion  shelf system  with lighting may also augment the seedlings starting prior to then loading into the growth conveyor system ( extreme winter start cycle within heated green house ). 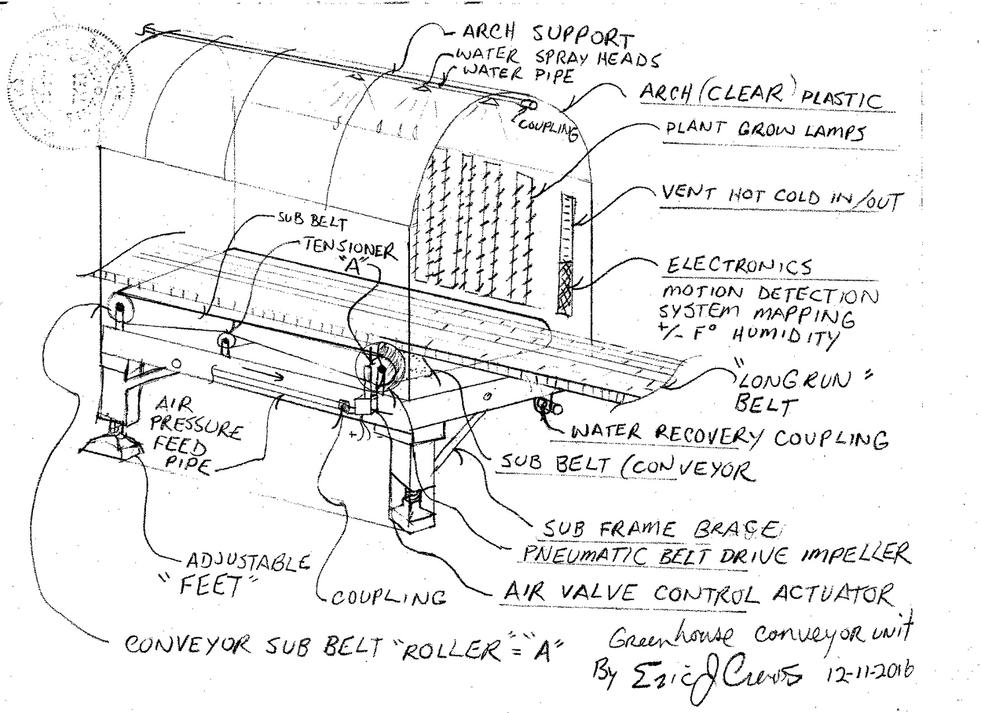