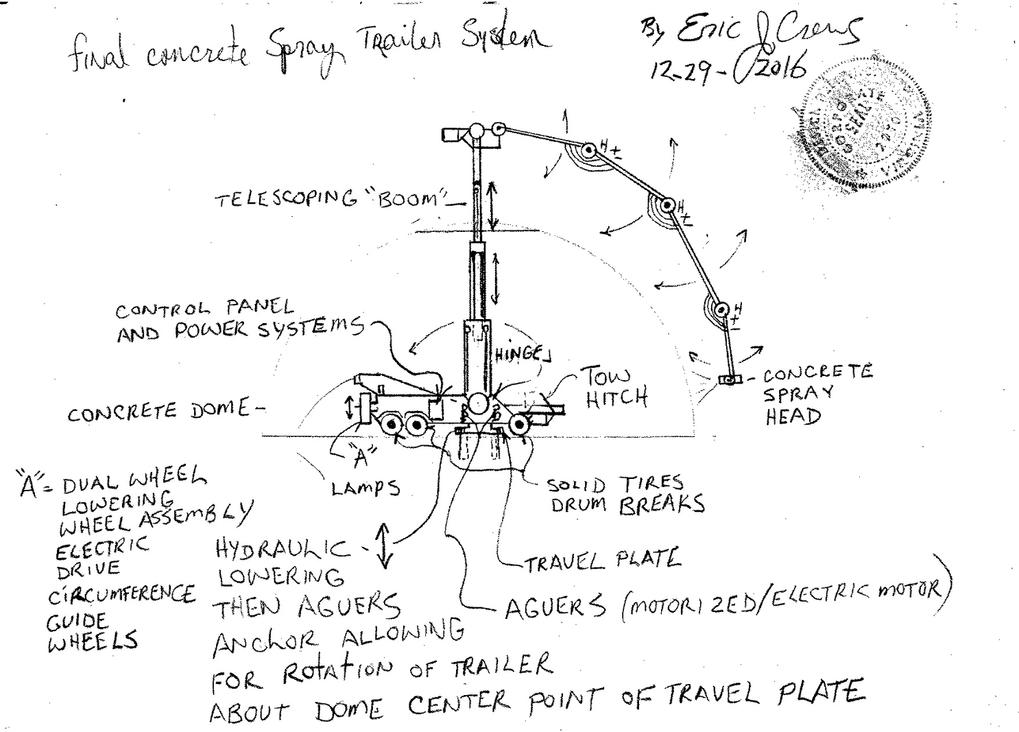 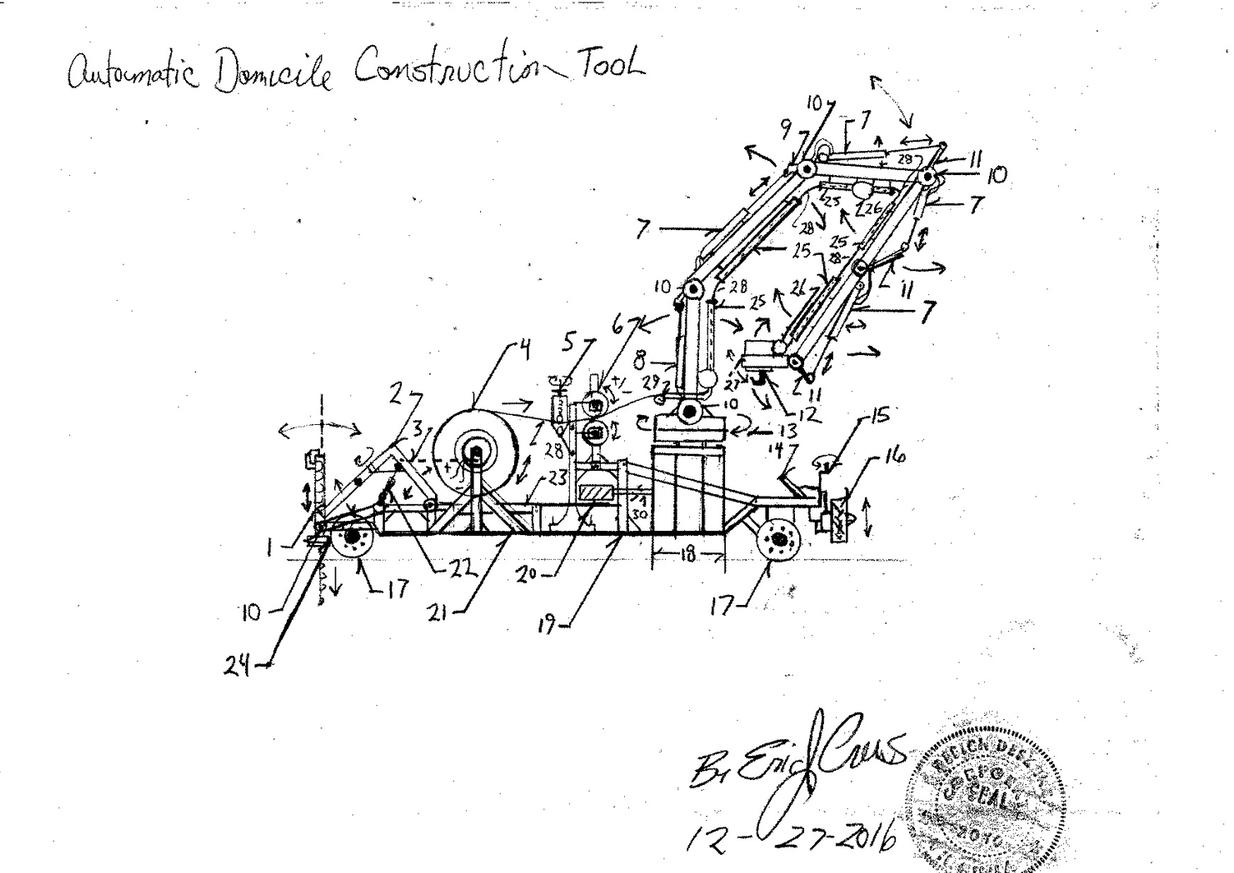 The "Automatic Domicile Construction Tool" is a dome building tool that will automatically construct a domicile resistant to earthquake fire and high velocity atmospheric conditions such as hurricane / typhoon.

The design is upon a automotive trailer then containing a a plastic cable feed system that will sonic weld at the union points as the trailer then extends it's anchor auger and  rolls in a circle about it's center pivot. The "boom" arm is hydraulic and also houses a guide system for the plastic cable and concrete top coat spray system.

and plastic cable for the sub form to then support the concrete when it's curing.

lock pins  ( sum of four ) when in final position

in a circle with the center pivot at  the auger , number 1

17. axle assembly  containing disk breaks each side  ( sum of 4 tires two per side )

22. reel loader hydraulic pistons sum of two ie. each side

24. auger  base swivel ( anchors into the ground ) allows for the trailer to rotate in a circle

* Note - The concrete spray system pumps are then place under the meshed deck , number 23, then with the concrete flow traveling to the telescoping "boom" housing assembly to the continue to the "boom" and on to the deposition  "head" at the terminal end of the "boom"

* Note - The plastic cable may have embedded a metal  ( weldable ) "runner" within the cable then exposed upon one quadrant of the cable to then accept the cross wire weld that the auto tac welds the  "runner", within plastic cable, to the next "run" of the coiling dome.

This causes locked continuity to yield structural support for the deposition of sprayed concrete. The "cross wire " is then guided by powered placement position arms that will cause the "cross wire" to be positioned in a zig zaging fashion to interlock the coils. A second addition of the "cross wire" zig zaging  wire then also tac welded will then act as the structural wire reinforcement "cage" for the  dome.The second deposition then to cause a gap ( empty space ) between the first and second application elevated off the surface of the dome..

The trailer is then positioned to it's lowest vertical height and an orifice is then cut by a cutting tool also attached to the "boom" allowing for extraction of the trailer from the interior of the domicile.The resulting piece then can be placed as an awning for the entry / exit. . The windows are then installed as per required but should then remain in a safe fashion with heavy storm shutters and or projectile safe inner wall then constructed to prevent high speed projectile from tornado from entering the building. The dwelling may be earth covered in full or in part...

Due to the cost reduction in material selection ie. the plastic coil then can be grown from the algae coils then also embedded with a stainless steel "runner"  ( weldable insert ) the stainless steel then at low cost with the fuel less electric refinement of steel ( electric arc furnace ), reducing the cost of production greatly.

The design system will also, as mentioned prior, via sonic welder,  then melt the plastic into position . The MIG welding head then to tac weld the "cross wire" and followed  by the "rise wire" ( "rise wire" = second offset "cross wire" higher elevation ).  The trailing assembly ( concrete spray system ) , upon the " boom deposition head ", will then spray the concrete as the system cycles in a circle to form a dome ... a "sweeping" production system with all functions occurring at one time.

domicile . This reduces the cost greatly for a dwelling. The base of the dome then has a bit thicker concrete deposition and will then upon the exterior use a buttress of earth  ( berm ) to lock it into place .  Certain locations may require piles of concrete filled stain less steel pipe ,inserted deep into the ground , locking the base of the dome, to safety the dome  ( depends on soil type water content, geographic location , slope / average grade, and latitude).

For the concrete spray system... a circular base ring is placed upon the ground to then feed the mechanism a constant run of wet concrete with the ability to feed the trailer's concrete spray system  while the trailer is in motion about 360 degrees. The primary mixer then outside the construction. The intake for the wet concrete is then connected under the mesh deck. The reels then of plastic cable with metal "runner"  then are on motorized carriages  within the domes perimeter / within the inner circumference.The motorized carriages are positionally sensitive to each other and to the trailer even in motion. They will reference the position of the trailer and drive themselves clear constantly moving until their loading is required. The used reels / spools then are loaded unto the motorized carriages by the "boom".

The final "top coat" water sealing components then stored in the plastic cable's spools center and mount atop number 23 for deposition, within a securing clamp system , as the top coat is a  two part plastic ( thermo-setting resin with UVA and UVB resistance) that mixes at the deposition head at the end of the "boom". the reason for a plastic top coating is then to give depth for a  fastener , such as a dry wall screw, to then be affixed to the domes exterior to accept an aesthetic surface coating such as a fire proof stucco.

* Note - within the cable deposition "head" the plastic cable will be twisted and aligned by  metal detecting sensor sensing where the embedded "stainless steel "runner" is positioned.

The cable then positioned for coil deposition  by drive wheel system for correct "runner" alignment when constructing the domicile. Since magnesium is present the tac weld will be on the exterior of the dwelling with arc flash shielding .

* Note - interior amenities finished as per pro quo safer work for carpenters. :) ( we like fire proof interiors too...)

Due to the nature of the sprayed concrete drying time for additional thickness requirements the following concrete spray system method then will be used for thickness domes second coating of concrete atop the deposition done by the proceeding design system. the final dual component  "plastic" layer will then also be able to be applied with the second trailer design.